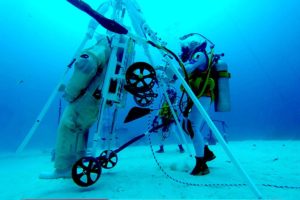 European Space Agency (ESA) recently tested a device called Evacuation System Assembly (or LESA), which is designed to assist in astronaut rescue missions on the surface of Moon. As per ESA, it is world’s 1st device aimed to help future incapacitated astronauts.

Among other preparations for NASA’s 2024 Moon mission (Artemis Mission), scientists are testing the Lunar Evacuation System Assembly, or LESA device.

It is developed by European Space Agency (ESA), an intergovernmental organisation of 22 member states dedicated to space exploration.

Feature: LESA is a pyramid-like structure. It is designed in a way to be deployed just by a single astronaut in lunar gravity to rescue an incapacitated crew mate.

Need: On mission Astronauts wear Extravehicular Activities (EVA) suits that are bulky, heavy due to which they do not allow for a full range of movement. Thus while wearing an EVA suit, there is no way that an astronaut could carry their fallen crewmate over their shoulder.

Testing: NASA astronauts are testing LESA under sea. This is because, with its rocky, sandy terrain and warm salty water, the bottom of ocean floor bears much more similarity with lunar surface.

In order to rescue a fallen colleague, LESA can be operated just by a single astronaut thus ensuring a rapid and safe rescue.

LESA can be transported like a golf caddy and placed close to the fallen astronaut, hence enabling an astronaut to lift their crewmate onto a mobile stretcher in less than 10 minutes, before carrying them to safety of a nearby pressurised lander.