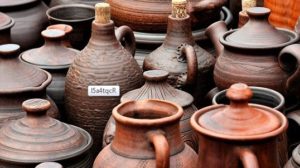 Khadi and Village Industries Commission (KVIC) launched first ever ‘Terracotta Grinder’ at Sewapuri in Varanasi, Uttar Preadesh. This machine will grind the wasted and broken pottery items for re-using in pottery-making.

It was designed by KVIC Chairman, Vinai Kumar Saxena.

It was fabricated by a Rajkot-based engineering unit.

It will also help in solving problem of shortage of clays.

Terracotta grinder will lessen the cost of production. The cost of one tractor trolley of clay is Rs.2,600 in the Varanasi area, therfore, by mixing 20% of this wasted terracotta powder, the potter will make a saving of at least Rs.520. This will also create more job opportunities in villages.

This will also meet the growing demand for terracotta products at Varanasi railway station following a direction by Union Ministry of Railways to Zonal Railways and IRCTC to take urgent necessary action for ensuring the use of locally produced, environment friendly terracotta products such as Kulhad, glasses and plates for serving passengers through all static catering units at Varanasi and Raibareilly railway stations.

This machine will be a boon for potters as Union Minister of Micro, Small and Medium Enterprises (MSME) Nitin Gadkari has proposed to introduce kulhads and other terracotta products at 400 prominent railway stations. However, the proposal is under active consideration of Indian Railways.