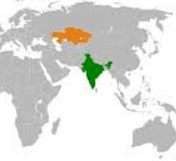 Kazakhstan has opened its honorary consulate in Chennai. The consulate will cover the states of Tamil Nadu, Karnataka and Kerala. It will be headed by well-known businessman Suraj Shantakumar. This year marks the 25th anniversary of the establishment of diplomatic relations between India and Kazakhstan.
Kazakhstan has expressed confidence that the establishment of the consulate in Chennai, which is a major industrial centre would promote the potential for economic cooperation in a number of areas like IT industry, engineering, tourism, transport infrastructure, as well as agricultural production.

Among the countries that constituted former USSR, Kazakhstan has emerged as the second largest economic partner for India. Kazakhstan is natural resources, minerals, oil and gas and chemical products. It is the largest exporter of Uranium to India. The prospectus of cooperation looms large in several areas. Recently, there was a meeting between the special working groups on textiles from the two countries in Kazakhstan. The bilateral trade between the two countries was around 618 million USD in 2016. India exports pharmaceuticals, tea, tobacco, and engineering equipment to Kazakhstan and imports oil products, metals and natural minerals from that country.