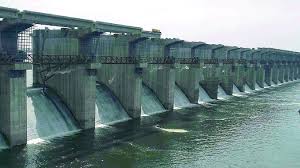 The Expert Appraisal Committee (EAC) of Union Ministry of Environment, Forest and Climate Change (MoEFCC) has accorded environmental clearance for Kaleshwaram Lift Irrigation Project (KLIP) in Telangana.
The project is to build at estimated to cost about Rs. 80,499.7 crore and proposed to be completed in three years. It is the costliest irrigation project to be taken up by any state in the country.

The KLIP envisages construction of barrage across Godavari River after the confluence by its tributary Pranahita near Madigadda village in Telangana’s Karimnagar district. It is redesigned version of Pranahitha-Chevella Lift Irrigation Scheme, proposed in 2007 by the undivided Andhra Pradesh Government.
The KLIP aims to divert 180 TMC of water for providing irrigation facility in 7.38 lakh hectares covering seven districts of Adilabad, Nizamabad, Karimnagar, Medak, Warangal, Nalgonda and Rangareddy districts. It also proposes to stabilise existing command area of 7.62 lakh hectares. It will also provide drinking water facility for Hyderabad and Secunderabad.
Under the KLIP, two more barrages between Medigadda and Sripada Yellampally are proposed to be constructed apart from Medigadda barrage. The project will have canal system of about 1,832 km. The 81 km long tunnel built between Yellampally barrage and Mallannasagar reservoir under this project will be the longest tunnel to carry water in Asia after completion.