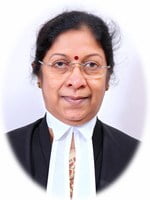 Justice Manjula Chellur took oath as Chairperson of Appellate Tribunal for Electricity (ATE), Ministry of Power. Prior to this appointment, she was Chief Justice of Bombay High Court. She has been appointed for a period of 3 years or until further orders, whichever is earlier.

Smt. Justice Manjula Chellur was born on 5th December, 1955 in Karnataka. She received her Bachelor of Arts degree from Allum Sunmangalamma Women’s College, Bellary. Later she had earned her law degree from Renukacharya Law College, Bangalore. In 1977, Supreme Court of India had sponsored her on Gender & Law fellowship to England’s University of Warwick.
She was first woman Chief Justice of Calcutta High Court. She also served as Chief Justice of Kerala High Court and first female judge of Karnataka High Court. She was second woman to be appointed as Chief Justice of Bombay High Court  in 2016 and retired in December, 2017.

It has been established by Union Ministry of Power in April 2004 by virtue of Section 110 of The Electricity Act, 2003. It has jurisdiction throughout India has been set up to hear appeals or original petitions against orders of Adjudicating officer or The Central Regulatory Commission or State Regulatory Commission or Joint Commission constituted under Electricity Act. It is conferred with original jurisdiction to hear petitions under Section 121 of the Act and issue directions to any appropriate commission for performance of its statutory functions. It consists of Chairperson and three other Members. Every Bench constituted by Chairperson consists of at least one Judicial Member and one Technical Member. The tribunal ordinarily sits at Delhi.