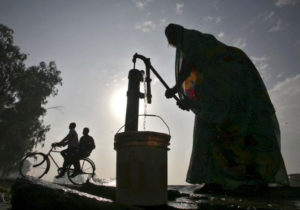 It is a collaborative effort of various Union Ministries and State Governments, being coordinated by Department of Drinking Water and Sanitation (DDWS).

Team: Central government officers, led by joint secretaries and additional secretaries, are assigned to these 256 districts and district administration will also nominate 2 members to join the team. This team of officers from central government and district administration will visit and work on water stressed districts and blocks to ensure water conservation interventions.

Campaign is centred on 5 aspects

Special Intervention: Water conservation efforts will also be supplemented with special interventions such as

Phases: Campaign will run through citizen participation during

Large-scale Communications Campaign: has also been planned side by side with JSA, which will involve mass mobilisation of different groups such as swachhagrahis, school students, college students, youth groups (NSS/NYKS/NCC), Self Help Groups (SHG), Panchayati Raj Institution members, defence personnel, ex-servicemen and pensioners, among others.

Significance: With this initiative government aims to provide drinking water to every household on priority and in a sustainable manner. It is also expected to bring positive change in people for water conservation.

Campaign will help people to work for rain water harvesting, maintenance and upkeep of ponds and village tanks and conservation of water.