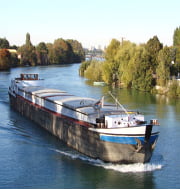 The Inland Waterways Authority of India (IWAI) has raised Rs. 660 crore as Fully Serviced Bonds. The oversubscribed bonds were issued through e-bidding on BSE Portal and the entire amount of Rs.660 crore was raised in single tranche at a coupon rate of 7.47%.

The proceeds from these bonds will be utilized by IWAI exclusively for capital expenditure for development of National Waterways (NWs) under National Waterway Act, 2016 during 2017-18. The principal and interest on these bonds will be financed by budgetary provisions in demand for grants of Ministry of shipping. The interest payment will be on semi-annual basis and the principal on maturity. Prior to raising bonds, IWAI had engaged arrangers, credit rating agencies, registrars and trustees. Both CRISIL and CARE rated proposed bonds of IWAI as “AAA: STABLE”.

IWAI is the statutory body in charge of the waterways in India. Its headquarters is located in Noida, UP. Its main function is to build the necessary infrastructure in the inland waterways, surveying the economic feasibility of new projects and also carrying out administration and regulation.