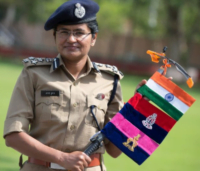 The South Pole is the southernmost point on the surface of the Earth and is at the centre of the Southern Hemisphere. It is situated on the continent of Antarctica.
The South Pole is the coldest and driest place on Earth. The temperature there ranges from minus 37 degrees to minus 48 degrees. As a result of this harsh climate, there are no native resident plants or animals at the South Pole.  South polar skuas and snow petrels are occasionally seen there.

The expedition began from Chile. IPS officer Aparna Kumar began her journey with a team of seven members and two guides. The team walked for 111 miles.

Aparna Kumar is an IPS officer of Uttar Pradesh cadre and hails from Karnataka. The officer is serving ITBP on deputation as Deputy Inspector General (DIG).