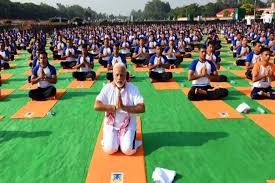 The 4th International Yoga day was celebrated on June 21, 2018 across the world to raise awareness worldwide of the many benefits of practicing yoga. The theme this year was “Yoga for Peace”. The day’s celebration in India were led by Prime Minister Narendra Modi from Dehradun, Uttarakhand. He was joined by joined thousands of volunteers, who performed Yoga asanas in the lawns of Forest Research Institute (FRI), Dehradun.

The idea of celebrating the International Yoga Day was pitched by Prime Minister Narendra Modi at United Nations General Assembly (UNGA) in September 2014. Later in December 2014, UNGA unanimously (endorsed by record 175 member states) adopted India-led resolution (69/131) to observe 21st June as International Day of Yoga.
This resolution was adopted under agenda of UN’s ‘Global Health and Foreign Policy’. The date 21st June was selected because it represents one of the two solstices and is the longest day in Northern Hemisphere (summer solstice) which has special significance in many parts of the world. The first International Yoga Day (IYD) was celebrated across the world on 21 June 2015.

Yoga is an ancient physical, mental and spiritual practice that originated in India. The word yoga derives from Sanskrit which means to join or to unite, symbolizing union of body and consciousness.  Yoga if it is practiced by all on daily basis in the early morning has numerous health benefits.  The benefits of Yoga include increased muscle strength and tone, increased flexibility, improved respiration, energy and vitality. It also helps to maintain balanced metabolism, reduces weight, improves cardio and circulatory health and improves athletic performance.  It was inscribed in the representative list of Intangible Cultural Heritage of Humanity  by UNESCO in December 2016.