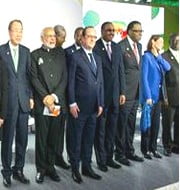 The ISA is brainchild of India, jointly launched by Prime Minister Narendra Modi and French President Francois Hollande in November 2015 in Paris on sidelines of COP-21 of UN Climate Conference. Its secretariat is located in campus of National Institute of Solar Energy (NISE), Gwalpahari, Gurgaon, Haryana.
It aims at addressing obstacles to deployment at scale of solar energy through better harmonization and aggregation of demand from solar rich countries by bringing standardization in solar technologies and fostering research and development.
Under this alliance, 121 countries that fall within tropics i.e. between Tropic of Cancer and Tropic of Capricorn have been invited to make collaborative efforts to harness solar energy to generate the electricity. Most of these countries fall within Asia, Africa and South America.
The institutional structure of ISA consists of an Assembly, a Council and a Secretariat. Its members will take coordinated actions through programmes and activities that will aggregate demands for solar finance, solar technologies, innovation, R&D and capacity building.