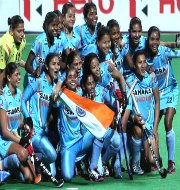 Indian women’s hockey team has qualified for 2016 Rio Olympics and now joining nine other teams.
It was announced by International Hockey Federation (FIH) after Great Britain’s semifinal victory over Spain and Netherlands’ win over Germany in the other semifinal in the 2015 European Championships.
These victories freed one quota for 2016 Rio Olympics as both the finalists already have qualified for the Olympic Games.
This qualification for Indian women’s hockey team comes after long gap of 36 years as they had featured last time in 1980 Moscow Olympics and was placed at 4th position.
10 women’s team qualified for 2016 Rio Olympics: China, Great Britain, Germany, Australia, Netherlands New Zealand and US through the Hockey World League Semi-Finals, South Korea as Asian Games champions, Argentina as Pan Am Games champions and India.