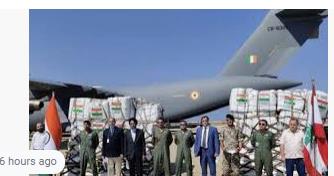 In a humanitarian gesture, India has sent 58 tonnes of emergency humanitarian aid to Lebanon in an air force plane to assist the people affected by the explosions in Beirut on August 4. The government has sent a separate consignment of personal protective equipment, including surgical gloves and surgical gowns.

Details of the Aid to Lebanon

India has sent the humanitarian aid to Lebanon to help it tide over the present crisis which has coincided with the COVID 19 pandemic in the country along with the entire world. The aid was dispatched in a C-17 heavy-lift aircraft of the Indian Air Force in response to an assessment of requirements by the Lebanese authorities. The aid includes emergency medical supplies, wheat flour, sugar, pulses and relief materials such as blankets, dignity kits and sleeping mats, which are in demand because a lot of people have been rendered homeless.

What happened in Lebanon?

On August 4, nearly 3000 tonnes of ammonium nitrate stored in Beirut’s port exploded wiping out the commercial hub of the city and damaging many parts of the capital of the country. The blasts killed more than 170 people whereas 6000 people were injured. Apart from that, around 3 lakh people have become homeless due to this mishap.

Impact of the Blast

The total damage has been estimated at $10 billion to $15 billion. As per the assessment by the World Bank, 50000 residential units were damaged and 80 per cent of residential buildings and infra were affected by the explosions in the capital of the country.