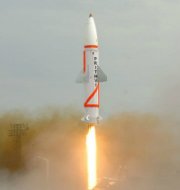 India has successfully conducted another night trial of its indigenously developed nuclear capable Prithvi-2 missile from a mobile launcher of the Integrated Test Range (ITR) at Chandipur in Odisha coast. The successful test fires were part of a routine user trial for armed forces and met all parameters. Earlier, the flight test of surface-to-surface missile was carried out barely a 15 days after two back-to-back trials of Prithvi-2 were conducted successfully at night from same base on 20 November.

It is a tactical surface-to-surface short-range ballistic missile (SRBM) with a strike range of 350 kilometres and is capable of carrying 500-1,000 kilograms of warheads. The state-of-the-art missile is powered by liquid propulsion twin engines and uses an advanced inertial guidance system with manoeuvring trajectory to hit its target.

The has been developed by Defence Research and Development Organisation (DRDO) under the Integrated Guided Missile Development Program (IGMDM). It is deployed by Strategic Forces Command (SFC) of the armed forces. The 9-metre-tall, single-stage liquid- fuelled ‘Prithvi’ is first missile to have been developed by DRDO under IGMDP. The missile has been already inducted into the armoury of defence forces in 2003.