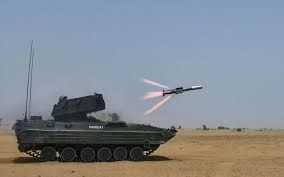 On September 22, 2020, the Defence Research and Development Organization conducted a successful flight test of ABHYAS- High speed Expendable Aerial Target (HEAT) vehicle at the Balasore test range in Odisha. This can now be used as a target for evaluation of missiles.

ABHYAS-HEAT is an air vehicle. It uses twin underslung boosters.

ABHYAS was designed and developed by the Aeronautical Development Establishment of DRDO. The missile is powered by a small gas turbine and has MEMS based Inertial Navigation System. It also has Flight Control Computer for control and guidance.

During the test, 5 km of flying altitutde, 2g turn capability of test vehicle and vehicle speed of 0.5 mach was achieved.

The cost of the project is Rs 150 million.

ABHYAS-HEAT was developed by adopting DRDO’s Lakshya. Lakshya is a high-speed target drone system developed by DRDO. The first launch of ABHYAS was held in Chitradurga Aeronautical Testing Range in 2012.

There are no legally binding multilateral instrument that deals with issues of missile under United Nations. However, there are multilateral regimes that seek to prevent proliferation of missiles and missiles related technology. The yare Hague Code of Conduct and Missile Technology Control Regime.

India became a member of MTCR in 2016. It was established in 1987 by the G-7 countries. The main purpose of MTCR was to check on the proliferation of unmanned delivery system of nuclear weapons, especially the systems that can carry payload up to 500 kg till 300 km of range.

It was established in 2002. It aims to regulate access to ballistic missiles. It does not ban the missiles, but restricts its production. The codes do not call for restraint in testing and export of missiles.