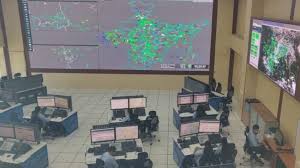 India now has a state-of-the-art Central Command Centre for Air Traffic Flow Management (C-ATFM) in New Delhi, which will optimise utilisation of resources such as airspace and aircraft at the capacity-constrained Indian airports.

It is a system that integrates flight data from various subsystems like ATC (Air Traffic Control) Automation System, flight updates and flight update messages so as to provide safe and orderly flow of traffic. It is a world class system where on one large screen anyone can see country’s all civil aviation infrastructure such as planes on ground, planes which are in air, etc. as all of it is integrated with the ATC (air traffic control). It also displays weather information along with static information about airports, airspaces and air routes.

Working: The centralised air traffic flow management system processes demand and capacity information along with static information about airports, airspaces and air routes and provides decision-making tools to ATFM flow manager for collaborative decision making and to ensure regulated flow of traffic at each airport in India.

ATFM system has connected all airports in India.

Principle: is fair distribution of slots and other available resources distributed to everyone.

This means that the system is supported by 36 Flow Management Positions (FMP) at various airports such as Delhi, Mumbai, Bengaluru, Kolkata, Chennai, and Hyderabad etc. The ATFM network also includes 8 defence airports, which are provided with FMPs.

Purpose: C-ATFM system is primarily meant to balance capacity against demand so as to achieve optimum utilization of airport, airspace and aircraft.

Need: As country’s major airports are facing a massive infrastructure crunch and capacity constraints, with terminals handling way more passengers than their capacity to handle. In such scenario this new system is expected to cut down on flight delays by synchronising aircraft movement with real time conditions.

With the help of C-ATFM all aviation stakeholders who are connected through various means of communications, and through dedicated networks, all of them can now access same information and everyone has same visibility towards each other’s resource requirements and resource availability.

India has now become 7th country after the US, Europe, Australia, South Africa, Japan, Brazil to have a Centralised Air Traffic Flow Management System. This should now help ease up conditions at airports with maximum infra shortage such as Delhi, Mumbai and Bangalore and for other terminals which are fast becoming new pain points for flyers such as Patna and Lucknow.