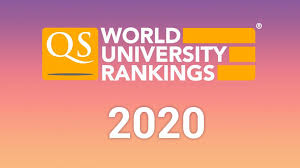 The Indian Institute of Technology, Bombay (IIT-Bombay), has emerged as best-ranked Indian institute globally at 152nd position in QS World University Rankings’ 2020. IIT-Bombay has been securing top position among all Indian institutes for past three years and in 2020 edition it has improved its rank by 10 moving up places from 2018 ranking.

India’s Performance: This year too no Indian university was able to secure a place in top 100 best universities. In total, there are 23 educational institutions from India which featured in broader list of top 1000, with only nine in the top 500. Out of 23, only four have managed to improve their ranks. IIT-Bombay, IIT-Delhi and IISc-Bangalore are the only three institutions that have managed berths in the top 200 list of QS World Rankings.

IISc Bangalore lost 14 places in this year’s ranking and ended at 184th place even when it achieved world’s 2nd-best score for research impact and secured full 100 marks for citations per faculty metric. It is also 1st ever Indian institution to see its research cited over 1 lakh times in five-year period.

OP Jindal Global University based in Sonipat is the only new entrant in this years’ list. It is a private Indian university, founded in 2009, and is one of the youngest to enter top 1000 list. It was ranked in between 751-800 in QS global list and consequently, emerged as 14th best institute in the country.

It is one of the two most sought after rankings for educational institutes globally.