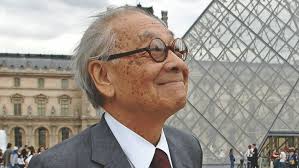 Ieoh Ming Pei, the globe-trotting, versatile, preeminent Chinese-US architect who created a distinct brand of modern building design with his sharp lines and exquisite structures, has died at age of 102 years.

I.M. Pei was born on 26 April 1917, in Canton, China and in 1935 he came to United States with plans to study architecture. He studied architecture at Massachusetts Institute of Technology (MIT) and Harvard University and had plans to practice in China. But World War II and revolution in China prevented him from going back

In 1948 in US he started his early work of designing low-income housing, office buildings, and later shifted to designing mixed-used complexes to a worldwide collection of municipal buildings, hotels and museums. Some of them are Society Hill apartment complex in Philadelphia, Mile High Center office building in Denver, and Kips Bay Plaza Apartments in Manhattan.

His other renowned works includes: