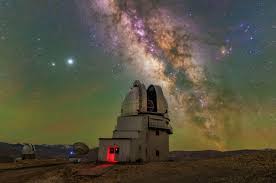 The Himalayan Chandra Telescope is located at the Indian Astronomical Observatory (IAO). It has been scanning the night sky in search of comets, stellar explosions, exo-planets and asteroids.

It operates using delicate satellite communication link from Centre for Research and Education in Science and Technology (CREST), IIA (Indian Institute of Astrophysics). The telescope marked 20 years of successful operation with more than 260 research papers published using data obtained from it.

Other Telescopes at IAO

HAGAR is High Altitude Gamma Ray Telescope. It is an atmospheric Cerenkov telescope that was set up in 2008. It has an array of seven telescopes.

It was the first robotic telescope of India. It is an international collaborative of telescopes and astronomers to study the short-lived cosmic transients and near-earth asteroids.