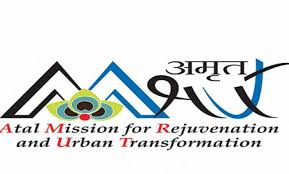 States across India have completed 2854 projects worth Rs 11110 crores under the Atal Mission for Rejuvenation and Urban Transformation (AMRUT), as per the data available on the website of AMRUT scheme. The scheme is meant to ensure the transformation of the urban areas of the country.

Highlights of the AMRUT Data

State Annual Action Plans submitted by all states for the entire Mission period (June 25, 2015- March 31, 2020) have been approved at a cost of Rs 77640 crores, including committed central assistance of Rs 35990 crores.

As per the RTI reply filed by the Ministry of Housing and Urban Affairs to the Lok Sabha, contracts have been awarded for 5384 projects costing Rs 73641 crores under the Mission. About 2855 projects costing Rs 64616 crore are under implementation. Further, 476 projects costing Rs 10460 crores are at various stages of tendering. Some states have taken up projects in excess of their action plan size, the extra cost of which is borne by the states.

What is AMRUT Mission?

Atal Mission for Rejuvenation and Urban Transformation (AMRUT) is the new version of the Jawaharlal Nehru National Urban Renewal Mission (JNNURM). The main thrust areas of the Mission are:

Five hundred cities have been selected under AMRUT scheme as per the following criteria:

National Heritage City Development and Augmentation Yojana (HRIDAY) was launched in 2015 with the aim of bringing together urban planning, economic growth and heritage conservation in an inclusive manner to preserve the heritage character of each Heritage City. It will support the development of core heritage infra projects including revitalization of linked urban infra for heritage assets such as monuments, ghats, temples, etc.