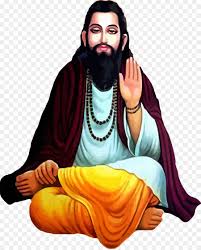 The Bhakti Movement Saint Guru Ravidas Jayanti is being observed on February 27, 2021 across the country.

He was an Indian poet-sant of the Bhakti movement. He founded the Ravidassia religion in the 15th to 16th century CE. He is respect as a guru in the region of Rajasthan, Uttar Pradesh, Maharashtra, Gujarat, Madhya Pradesh, Haryana and Punjab. He was a social reformer and a spiritual saint. The poems of Ravidas have also been included in the Panch Vani text of the Dadupanthi tradition within Hinduism. The saint taught the removal of social divisions of caste and gender. He also promoted the unity in the light of personal spiritual freedoms.

The saint was also known as Raidas. He was born in Seer Goverdhanpur village of Uttar Pradesh near Varanasi. His birthplace is now called as Shri Guru Ravidas Janam Asthan. His parents belonged to a leather-working Chamar community so they belonged to the untouchable caste.

It is the theistic devotional trend that spread in the medieval Hinduism. The movement later acted as a de facto catalyst in the formation of Sikhism. The movement was originated in eighth-century south India and spread northwards. It covered the east and north India in 15th century and onwards. It developed around the gods and goddesses.