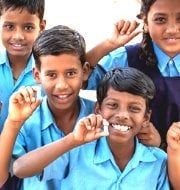 The National Deworming Day is observed every year on February 10 with main objective to combat parasitic worm infections among preschool and school-age children across India.
This year it is third edition of the observance of this day after it was launched in 2015 by the Union Ministry of Health and Family Welfare (MoHFW).
The goal of the day is to deworm all preschool and school-age children between the ages of 1-19 years in order to improve their overall health, cognitive development, nutritional status and quality of life.
On this day, Albendazole tablets are given to all targeted children. This year for the first time, deworming tablets were given to the private schools children also.