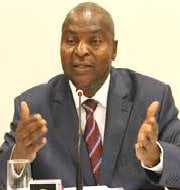 Faustin Archange Touadera (58) took the oath of office as the new President of Central African Republic (CAR).
With this he becomes first elected leader of CAR since Muslim rebels had overthrown the government in early 2013. His presidency puts an end to a two-year transitional government that came into force in early 2014.
Touadera is well respected former mathemathics Professor. He had served as Prime Minister as former Prime Minister of ex-president Francois Bozize from January 2008 to January 2013.
Background
In the February 2016, runoff elections Touadera as an independent candidate had emerged victorious by securing nearly 63 percent of the total votes. He had defeated Georges Anicet Dologuele of Union for Central African Renewal Party who had obtained just over or 37.3 percent votes.
Central African Republic: It is former French Colony and one of the world’s most chronically unstable countries. In early 2013, it had suffered the worst crisis in its history when mainly Muslim Seleka fighters in a coup had toppled President Francois Bozize. Since then it was in the throes of civil war and was torn by religious tensions, plagued by chaos on the brink of pre-genocidal scenario.