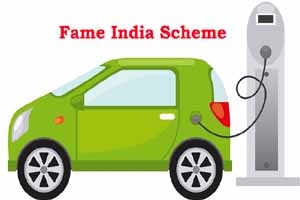 The Government of India recently sanctioned 670 Electric buses and 241 charging stations under phase II of FAME scheme. FAME is Faster Adoption and Manufacturing of Electric Vehicles. It was launched to promote electric mobility in the country.

The scheme aims on electrification of public transportation. It provides incentives for three wheelers and four wheelers, especially those used for public transport. The second phase of the scheme was launched in 2019.

Under the scheme, the benefits are extended only to those vehicles that are fitted with advanced batteries such as Lithium Ion batteries. The scheme aims to establish 2,700 charging stations in metro cities and also in smart cities and other cities with population more than 1 million. Under the scheme, charging stations will also be established on major highways that are connecting city clusters.

The FAME Scheme was launched to achieve the goals of National Electric Mobility Mission Plan, 2020

The scheme was launched to address the issue of environmental pollution and fuel security. The second phase of the scheme intends to increase the demand of electric vehicles, work on charging station infrastructure, provide a platform for technology.

Under the second phase, Rs 10,000 crores were allocated. It is to be implemented between 2019 and 2022. Of this allocated budget, Rs 1,000 crores have been set aside for setting up of charging stations. Also, the GoI has planned to incentivize 5 lakh three wheelers, 35,000 four wheelers and 7,000 electric buses.

It was launched in 2013 to achieve a target of 6 to 7 million sales of electric and hybrid vehicles by 2020. It aims to make hybrid and electric vehicles the first choice of the citizens while purchasing vehicles.