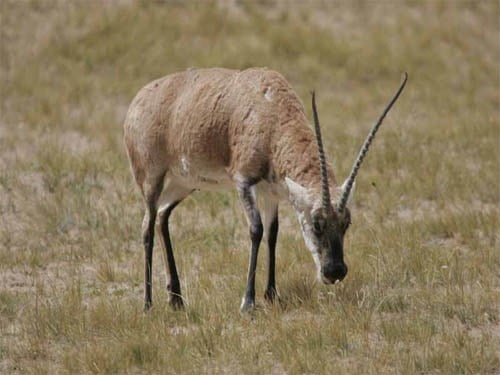 The Ministry of Environment and Forests and Climate Change (MoEFCC) has refused to allow captive breeding of Chiru (Tibetan antelope), whose underfur is used for making famous shahtoosh shawls.
The suggestion for captive breeding was made by Parliamentary Standing Committee on Science & Technology, Environment & Forests asking to consider captive breeding as it will add to livelihood of people of Kashmir.

Chiru for long time have been hunted for their underfur, which is renowned for its quality which is traditionally woven into an extremely fine fabric to make Shahtoosh shawls. It takes three to five hides to make a single shawl. Moreover, the wool cannot be sheared or combed and to collect the fur, the animals have to be killed. At present, Shahtoosh shawls’ sale and possession is banned in India and in many countries.

The Parliament panel was of view that MoEFCC should conserve and breed Chiru goat, which can then be given to shawl makers for collecting hair. This would increase number of these goats but would also add to sustainable livelihood opportunities of people of Kashmir, who are lot dependant on the handicraft of embroidered shawls. It also cited that China and Mongolia are breeding Chiru goats for its wool, which is very expensive. The cost of an embroidered shahtoosh shawl can run into crores of rupees.

Chiru is assessed as ‘Near Threatened’ by the International Union for Conservation of Nature (IUCN) 2017. Their current low population can only be maintained with continued high levels of protection in its natural. Any relaxation in protection regime of animal will lead to rapid population decline due to commercial poaching.
Chiru inhabits high-altitude Tibetan plateau and requires large expanse of land for its movement and ranging patterns to fulfil its feeding and breeding requirements. Rearing it in captivity is extremely difficult. Besides, any attempt to do conservation breeding at very high altitude regions of Ladakh may not be economical or feasible as humans cannot be posted there continuously for more than 2-3 months. Moreover Chinese also have failed to keep Chiru in captivity due to its poor survival rates.

Its Scientific name is Pantholops hodgsonii. This antelope is considered to be close to goat family. It lives at a 3,250-5,500 metre elevation in high altitude plains and montane valleys comprising of alpine and desert steppe and pasture, distinguished by low vegetation cover and productivity. Predators such as wolf, lynx, snow leopard, and red fox are predators of chirus and their young calves.
Protection Status: ‘Near Threatened’ in IUCN Red List. It has been enlisted in Schedule I of Wildlife Protection Act, 1972. To enhance its protection, its prime habitats have been declared as Wildlife Sanctuaries viz.  Karakorma Wildlife Sanctuary and Changthang Cold Desert Wildlife Sanctuary.