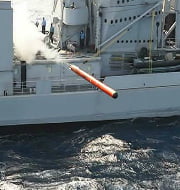 The Torpedo was test fired from Wheeler Islands in the coast of Odisha. The launch is important for India to establish its anti-submarine warfare capabilities. SMART is an anti-submarine Torpedo system and is the fastest in the world. It has a range of 650 km.

In 2016, the Government of India allocated Rs 340 crores to develop SMART. In SMART, two weapon capabilities have been combined to form one and thus Hybrid. The two weapon capabilities are the missile part and the torpedo part. The Torpedoes all over the world have launch range around 50 km and the rocket assisted one have till 140-150 km. However, SMART due to this hybrid technology has a range of 650 km.

China’s Yu-8 ASW missile works on the same hybrid technology as that of SMART. However, its range is only 40 km.

Torpedo is a self-propelled under water missile that is designed to be dropped into water from an aircraft or fired from a submarine or ship. The torpedoes explode on reaching a target.

The Advanced Light Torpedo Shyena was the first light weight Torpedo that was indigenously developed in India. It is being used by Indian Navy and Myanmar Navy. It was developed at the Naval Science and Technological Laboratory under Advanced Experimental Torpedo Programme.

The Myanmar Navy bought the Shyena Torpedoes in 2019.

It is an anti-Torpedo Decoy system that was inducted in Indian Navy in June 2020. The system can detect, divert and neutralise an incoming torpedo. Mareech was designed and developed by DRDO.

Varunastra is an electrically propelled, ship launched underwater Torpedo that was developed by Bharat Dynamics Limited that operates under Ministry of Defence. It is the only torpedo in the world that has GPS based locating aid. The operational range of Varunastra is 40 km.

The Takshak Torpedo is under development