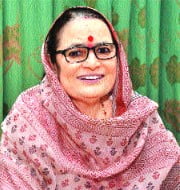 Dogri Poetess and novelist Padma Sachdev (76) has been chosen for the prestigious Saraswati Samman for the year 2015.
She has been chosen for her autobiography ‘Chitt-Chete’ written in Dogri language and published in 2007.
In her 662-page autobiography, Ms. Sachdev has included some historic photographs with dignitaries from her state, nation and the world.
Her work was selected by the jury presided by former Chief Justice AS Anand from 22 works in as many languages published between the years 2005-2014.