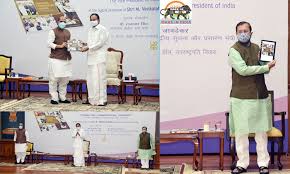 This book has captured through words and pictures the activities of the Vice President, which will also include his travels in India as well as abroad. The book, running into 250 pages, has been brought out by Publications Division of the Ministry of Information and Broadcasting. The book also gives a glimpse of the interactions of the VP with farmers, doctors, scientists, youths, industry leaders, administrators, artists among others. The foreign visits, the addresses of the VP to the Indian diaspora, etc. will also be highlighted in the book.

The Changes highlighted in the Book

The book introduces the changes that the VP has started in order to ensure smooth functioning of the Rajya Sabha. Also, in the final chapter of the book, the book describes how the VP has introduced during the time of the pandemic. The details of the ‘Mission Connect’ are also described in this book through which the Vice-President has enquired about the well-being of his teachers, friends, acquaintances, relatives, old-time associates, spiritual leaders, journalists and MPs.