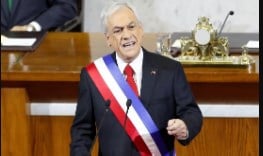 President of Chile Sebastian Pinera has declared a state of emergency in Santiago (Capital of Chile), following the worst violence the city has seen in years. The state emergency decision was taken after violent protests over an increase in the price of metro tickets held in the state, following which protesters blocked the railway system and clashed with the police. Protestors clashed with riot police in several parts of Santiago, and attacked the subway system.

President has clarified that the objective behind emergency declaration is to ensure public order and peace for the seven million inhabitants of Santiago.

President Pinera has given all the powers to country’s military for bringing security, peace and harmony in the state. He has also appointed Major General Javier Iturriaga del Campo as the head of national defence.

The state of emergency which restricts freedom of movement and assembly has been put in place initially for a period of 15 days. Also at present the curfew would not be imposed but the military would continuously patrol major trouble spots in the state.