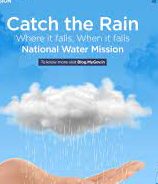 Prime Minister Narendra Modi is all set to launch the “Jal Shakti Abhiyan: Catch the Rain campaign” in the virtual mode. The campaign is being launched on the occasion of World Water Day on March 22, 2021. The campaign will be implemented under the theme– ‘Catch the rain, where it falls, when it falls’.

On the occasion, the Chief Ministers of Madhya Pradesh & Uttar Pradesh will sign a historic Memorandum of Agreement to implement the “Ken Betwa Link Project” in the presence of Prime Minister. This will be the first project of “National Perspective Plan” for interlinking of the rivers.

This campaign will be implemented across the rural and urban areas in the country. It will run till November 30, 2021.  The campaign will be launched as a Jan Andolan in order to undertake water conservation at the grass-root level with people’s participation. It seeks to nudge all stakeholders so as to create “rainwater harvesting structures” which are suitable to the climatic conditions in order to store the rainwater properly. As the part of campaign, the Gram Sabhas will also take “Jal Shapath” for water conservation.

This interlinking project involves the transfer of water from Ken River to the Betwa River by constructing the “Daudhan Dam” and a canal to link the two rivers. This project seeks to provide the annual irrigation of 10.62 lakh hectare. It will also provide the drinking water supply to around 62 lakh people. With the completion of project, 103 Megawatt of hydropower energy would also be generated.

The Ken Betwa Interlinking Project is of significant benefit for the water starved region of Bundelkhand. It will be benefiting the districts of Panna, Chhatarpur, Tikamgarh, Damoh, Datia, Sagar, Shivpuri, Vidisha and Raisen in Madhya Pradesh while the districts of Mahoba, Banda, Jhansi and Lalitpur in Uttar Pradesh. The project will also way to more such interlinking of river projects which in turn will ensure that scarcity of water does not comes in between the development of country.