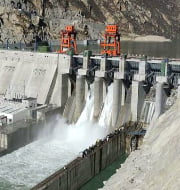 The Union Cabinet approved proposal to complete the balance works of North Koel Reservoir Project in Bihar, stalled since 1993. It also revived the project to address environmental concerns.
Under the revived project, storage of water in Mandal dam to be constructed under it will be will be restricted at lower level than envisaged earlier to reduce the submergence and to protect Betla National Park and Palamau Tiger Reserve. Moreover, a 24 MW power project as part of the original design also has been scrapped.

The project is situated on the North Koel river, tributary on Sone River. It aims to provide irrigation to 111,521 hectares of land annually in the most backward and drought prone areas in Jharkhand and Bihar. The construction of the projected originally had started in 1972 and continued till 1993 when it was stopped by the Bihar forest department over environmental concerns. The Mandal dam as part of the project had threatened to submerge portions of the Palamau Tiger Reserve and Betla National Park. The National Wildlife Board (NWB) had cleared the project in June 2017 with certain conditions.