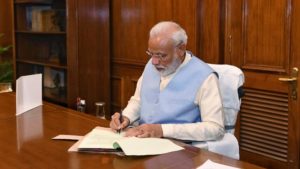 On 4th October, 2019, Cabinet approved new process of strategic disinvestment to privatize selected PSUs – Public Sector Units. The process was approved by PM Modi under which DIPAM – Department of Investment and Public Asset Management operating under Ministry of Finance will be the nodal agency to implement the process.

The PSUs to be put under sale will be identified by NITI Aayog along with DIPAM.

The Finance Minister Nirmala Seetharaman announced during the Budget that the divestment target from 90,000 crore rupees will be increased to 1.05 lakh crore rupees.

When the government sells its share of PSU to a private sector or an individual it is called divestment.

The divestment process in India began in 1991 when 20% of selected PSUs were announced to be divested in the interim budget. In 1993, it was increased to 49%. However, this was not implemented.

In 1996, GV Ramakrishna Committee was formed to make suggestions about the divestment process.

The money earned by the government through the disinvestment policy will be deposited in NIIF. It does not go into the Consolidated funds of India. It is managed by UTI, SBI and LIC.