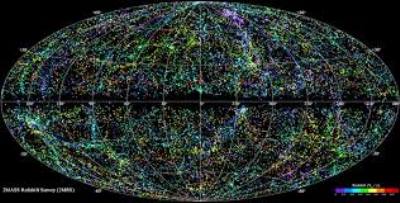 Astrophysicists from around 30 institutions across the globe have finally become successful to depict the complete story of the expansion of the universe through a 3D map of the universe. The map has been launched as part of a project launched more than two decades ago in which the expansion and also the source of the entire universe were to be depicted clearly.

The researchers from several renowned institutions have made the most accurate expansion history measurements over the widest-ever range of cosmic tune during the course of this project.

The map is based on the latest observations of the Sloan Digital Sky Survey, named the ‘extended Baryon Oscillation Spectroscopic Survey’ with the data being collected from an optical telescope in New Mexico over the period of the last six years. It reveals that the expansion of the Universe began accelerating at some point of time and has since been like that only. The reason for this has been attributed to the presence of dark energy, an invisible element that fits perfectly into the Theory of Relativity put forward by Albert Einstein. However, the origin of this energy could not be ascertained even in the current study.

Overall, the Hubble Constant, the currently accepted rate of expansion of the Universe, is 10 per cent slower than the values calculated before using other techniques.