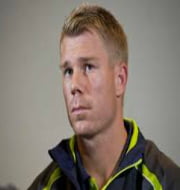 Australian cricketer David Warner was fined by the International Cricket Council (ICC) over speak in English spat with Indian counterpart Rohit Sharma.
He was fined 50 per cent of his match fee over the incident.
Incident: David Warner had demanded Sharma speak English instead of his native Hindi during India- Australia’s tri-series ODI match held at the Melbourne Cricket Ground (MCG).
The incident was sparked after India batsman Rohit Sharma ran a contentious single off an overthrow the Australians believed came after Warner’s return deflected off Sharma. It should be noted that Cricket etiquette dictates that batsmen do not run when a throw deflects off their body or bat.