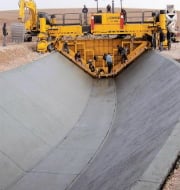 The first pump of this Godavari-Krishna linking project was installed and switched on in September 2015. It will benefit the people especially farmers in the Krishna delta in terms of timely availability and adequate quantities of water.
Polavarm project: It was declared as a national project under the Andhra Pradesh Reorganisation Act, 2014 and was being funded by the Union Government. It is being built on Godavari River.