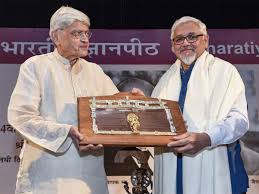 Renowned author Amitav Ghosh was felicitated with 54th Jnanpith Award for his outstanding contribution to enrichment of Indian Literature in English. He was presented the award by Gopalkrishna Gandhi, former Governor of West Bengal who was the chief guest at a function held at the India Habitat Centre in New Delhi.

Author Ghosh is 1st English language writer to become a Jnanpith laureate as all previous winners of prestigiuous award have been writers in Indian languages.

The 62 years old Kolkata-born author was described as a path-breaking novelist by the awarding body Bharatiya Jnanpith.

He was acknowledged for in his novels which treads through historical settings to modern era and weaves a space where past connects with present in relevant ways.

Even though he is a social anthropologist by academic training, he has written extensively in both fiction and non-fiction sphere of literature.

Till date his works has been translated in over 30 languages. He also holds four honourary doctrates.

Awards: He has been awarded Sahitya Akademi Award (1990) for his book The Shadow Lines and Padma Shri (2007) for his services to literature and education.

Literary Themes: The major thematic concerns in is literature includes migration and interconnections across places, cultures and races, as well as human distress and suffering caused by historical turbulences, especially at level of girmitiyas, coolies and lascars.

It is the highest literary award in India, presented annually by Bharatiya Jnanpith (a literary and research organization). It can only be conferred upon a citizen of India but with no posthumous conferral.

Prize: The award consists of a citation, shawl, goddess Saraswati statue and cah prize of cash prize of Rs.11 lakh.

Background: It was instituted on 22 May 1961 and is given for best creative literary writing by any Indian citizen in any of the 22 Indian languages listed in Schedule 8 of Indian Constitution. After 1982 onwards, the award is given for overall contribution to literature as prior to that a specific work used to be cited.