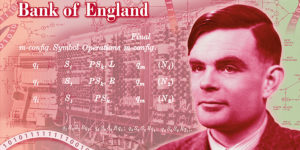 Alan Turing, the code-breaker during World War II has been chosen by Bank of England to feature on Britain’s new £50 note. The £50 note will be the last of Bank of England collection to switch from paper to polymer and is due to enter circulation by end of 2021. It shows a photo of Alan Turing taken in 1951.

This prestigious announcement comes decades after his tragic death following a conviction for homosexuality.

He is known for his code-cracking work that proved vital to Allies in World War II.

He played a pivotal role in development of early computers. He was an outstanding mathematician whose work has had an enormous impact on today’s world.

He is also referred as Father of Computer Science and Artificial Intelligence (AI) for his far ranging and path-breaking contributions in field.

His career was cut short by his conviction in 1952 for gross indecency with a 19-year-old man. Although he did not go to prison but was chemically castrated and died aged 41 due to cyanide poisoning in an apparent suicide in 1954.

Royal Pardon: In 2013 he received a posthumous pardon from Queen Elizabeth II.

Later in 2017, the Alan Turing Law posthumously pardoned men who had been cautioned or convicted under historical legislation that outlawed homosexual acts in Britain.