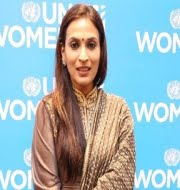 Noted filmmaker Aishwaryaa Dhanush was appointed United Nations Women’s Advocate for Gender Equality and Women’s Empowerment in India.
In her new role she will help raise awareness of UN Women’s core message of gender equality and women’s empowerment across India.
Besides she will play important role in boosting the organisation’s efforts to close the gender gap and achieve a more equal world, a Planet 50-50 by the year 2030.
With this, Aishwaryaa joins other celebrities who have joined hands with U.N. Women to work for gender equality and the empowerment of women.
Some of them star Sania Mirza, actor-director Farhan Akhtar, British actor Emma Watson, Hollywood stars Nicole Kidman and Anne Hathaway and Princess Bajrakitiyabha Mahidol of Thailand.
Aishwaryaa Dhanush is superstar Rajinikanth’s elder daughter and actor Dhanush’s wife. She had started her career by working as an assistant to director and Dhanush’s brother Selvaraghavan in her debut film 3.