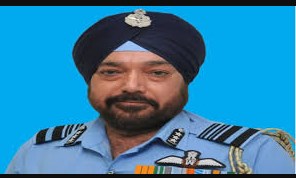 He was commissioned in IAF as a fighter pilot in December 1981.

He has diverse experience of accident-free operational flying including MiG 21, MiG 29 and other aircraft in IAF inventory and also helicopters.

Career: From 2006 to 2009, he was deputed as Defence Attache at Embassy of India, Bangkok, Thailand. As a Wing Commander he commanded 45 Squadron and was later the Commander of an Air Defence Direction Centre (ADDC) in Western Sector. He is a graduate of Defence Services Staff College (DSSC) and National Defence College (NDC) and is Master of Philosophy in Defence and Strategic Studies.

Honour: In recognition of his distinguished service, he was commended by Air Officer Commanding-in-Chief in 1997. He was also awarded Ati Vishist Seva Medal on 26 Jan 2011 by President of India.