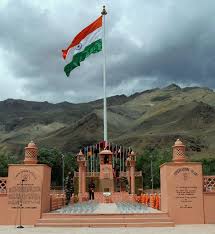 The 18th anniversary of Kargil Vijay Diwas was celebrated across India to commemorate the success of Operation Vijay and remember brave sacrifice of Indian soldiers during the 1999 India-Pakistan Kargil War.

The war took place between May and July of 1999 in Jammu and Kashmir’s Kargil district. It began with the infiltration of both Pakistani troops and terrorists deep inside Indian territory in strategic positions that overlooked the only road link between Srinagar and Leh.
The conflict is believed to have been orchestrated by the then Pakistan army chief General Pervez Musharraf without the knowledge of the then Pakistan Prime Minister Nawaz Sharif. Based on information from local shepherds, Indian Army was able to ascertain the points of incursion and launch “Operation Vijay”.
The Army declared the mission successful on July 26, 1999. Since then the day has been celebrated annually as Vijay Diwas. The victory came at a high price. The official death toll on the Indian side was 527, while that on the Pakistani side was between 357 and 453.