Various Issues around Ordinance Making power of President of India

Article 123 of the Indian constitution empowers the President to promulgate ordinances. This mechanism has been devised to enable the executive to deal with a situation that may suddenly and immediately arise when the Parliament is not in session (either one or both houses). Following points are important about ordinances:

If at any time, except when both Houses of Parliament are in session, the President is satisfied that circumstances exist which render it necessary for him to take immediate action, he may promulgate such Ordinances as the circumstances appear to him to require.

An Ordinance promulgated under this article shall have the same force and effect as an Act of Parliament, but every such Ordinance—

Explanation:—where the Houses of Parliament are summoned to reassemble on different dates, the period of six weeks shall be reckoned from the later of those dates for the purposes of this clause.

If and so far as an Ordinance under this article makes any provision which Parliament would not under this Constitution be competent to enact, it shall be void. In other words it can be issued only on those subjects on which parliament has jurisdiction.

The president can also withdraw ordinance at any time. But this power of President regarding ordinances is not discretionary; he has to act on the aid and advice of council of ministers. This ordinances cannot be issued amend the constitution.

Statement explaining about the circumstances that necessitated the issuance of ordinance is required to be placed before the house; this requirement is mentioned under the rules of Lok Sabha.

DC Wadhwa case (1987) judgement by Supreme Court dealt with the issue of ordinance. The governor of Bihar issued 256 ordinances between 1967 and 1981 and life of these ordinances ranged between 1 to 14 years. Court held that repromulgation of ordinances with the same text, without giving any chance to house to pass it, would amount to violation of the constitution, thus these ordinances can be struck down. Finally court held that power given to president to deal with extraordinary situation can be used as a substitute for the legislative power of the state assembly. Following graph shows the number of ordinances issued by government after 1990: 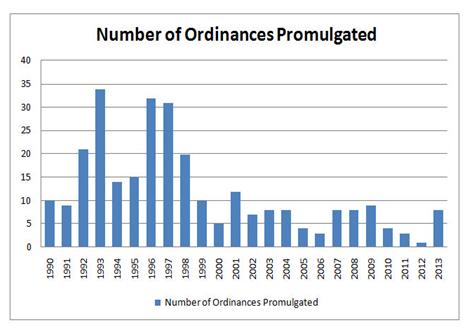 Recent ordinances issued by the Modi government are listed in the below graphics: Constitution has provided separation of power between legislature and executive. Through ordinance route executive creates instability about this separation.

Ordinance can be promulgated only when he is satisfied that circumstances exist for the same. In Cooper case (1970) Supreme Court held that his satisfaction can questioned on the ground of malafide. In other words his satisfaction can be questioned on the ground that he has deliberately prorogued the parliament to bypass the legislative route on a controversial subject.

Recent remarks by President Dr. Pranab Mukherjee ‘‘ a noisy minority cannot be allowed to gag a patient majority”, clearly shows the deadlock created due to adamant behaviour of opposition parties. Constructive debates in parliament have been replaced by intentional deadlocks created by opposition parties.