Rain-dependent areas can be broadly split into two: ‘dry lands’, which receive less than 750 mm of rain a year; and rainfed areas, which receive more than 750 mm. Comprising arid and semi-arid ecosystems, dry lands stretch from Gujarat in the west till Eastern Madhya Pradesh; and from Rajasthan till the southern tip of India. 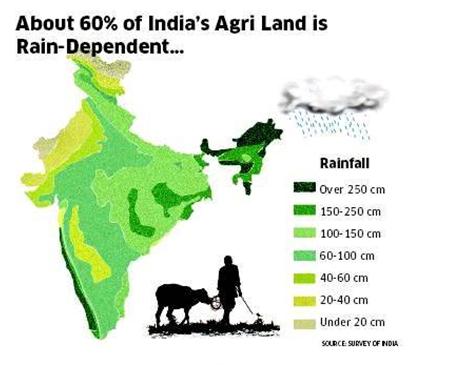 In India, about 60% of total net sown area comes under rainfed lands. Rainfed crops account for 48 percent area under food crops and 68 percent under non-food crops.

India ranks first among the rainfed agricultural countries of the world in terms of both extent and value of produce. Due to population pressure on agricultural lands, the poverty is concentrated in rainfed regions. The climate in India’s rainfed regions is characterized by complex climatic deficiencies, manifested as water scarcity for rainfed crop production. The climate is largely semi-arid and dry sub-humid with a short (occasionally intense) wet season followed by long dry season. Rainfall is highly unreliable, both in time and space, with strong risks of dry spells at critical growth stages even during good rainfall years. The fluctuations are due to numerous factors affecting the monsoonal climate including the atmospheric circulation and strong links to ENSO phenomenon in the Pacific Ocean.

Characteristics and issues with Rainfed Agriculture

In the resource constrained and dry areas, the farming is a survival mechanism rather than a growth oriented activity.

Rainfed agriculture is practiced under a wide variety of soil type, agro-climatic and rainfall conditions ranging from 400 mm to 1600 mm per annum.

Rainfed Crops are prone to breaks in the monsoon during the crop growth due to water stress. This water stress may be due to variability of rainfall, delay in sowing, diversity in crop management practice and variability of the soil type. The prolonged breaks can result in partial o r complete failure of the crops.

In past, the Rainfed farming system was mainly dependent upon the locally available inputs (seeds, manures, animal draft) and used to grow a number of crops, which were able to withstand drought-like situation. However, in recent times, the cropping systems have changed and currently the farmers in these rainfed areas have limited options. Many of the farmers in these regions started cultivating high value crops which requires intensive use of costly inputs (chemical fertilizers/ pesticides, hybrid seeds, life saving irrigation, farm energy etc.) and find it difficult to manage the resources on their own. This is the major reason of growing farm suicides in rainfed areas.

Green Revolution bypassed the less-favored rainfed areas which were not the partners in this process of agricultural transformation. Green Revolution was designed around growing high-yielding varieties of wheat and rice, which needed plenty of water and chemical inputs. The entire agricultural research framework, incentive structure, price support, input subsidies, extension system were designed to ‘flow’ along with irrigation.

In the floodplains of the north, the farmers, realising rainfall risk was a thing of the past, switched to HYVs because canals were there for irrigation. However, the story was different in the drylands. Here, seeds and fertilizers reached but water did not reach. Those who wished to adapt to the new seeds and fertilizers, created the predictable water supply for themselves. When electricity came, these farmers invested in groundwater pumps. The result was tube wells became the mainstay of irrigation in India.

According to a Planning Commission report, titled ‘Synopsis of Groundwater Resources in India’, in 1960-61, canals and tanks accounted for 61% of non-rain water for irrigation, compared to 0.6% for tube wells. In 2002-03, the share of canals and tanks was down to 33%, while tube wells had increased to 39%.

To reduce their vulnerability to rains, farmers in some areas grew crops such as jowar, bajra and pulses. These crops are low-yielding, but less affected by variations in rainfall. This saved the farmers from the risky nature of farming in rainfed and dry areas.

In the same field, they planted multiple crops. For instance, Jowar or pulses, both drought-resistant, would be planted alongside wheat, which gave high yields in normal rains. They also maintained livestock or, if forests were in the vicinity, gathered minor forest produce.

However, with the advent of green revolution and advent of electricity and groundwater tube wells, the cropping patterns also changed.

For example, the farmers of Malwa (MP) used to grow jowar during the rains and Malwi Ghehu , a local wheat variety, after that till the advent of Green revolution. However, once the pumps came in, farming became a year long activity. Cash crops like soya displaced jowar. HYVs of wheat displaced Malwi Ghehu. This is the story of almost all parts of India, and that is the reason that cotton, maize and soya remain the major crops of the rainfed areas of India.

The too much exploitation of the groundwater by tube wells led to the depletion of this finite resource. For example, in some parts of Madhya Pradesh, the groundwater levels have plunged from 50 ft in the 1970s to 700 ft now. Today, it has taken a shape of acute crisis in six states of India.

Between 1995 and 2004, the proportion of districts in semi-critical, critical and over-exploited has grown from 5% of the agricultural area and 7% of the population to 33% and 35% respectively.

The six states where the level of groundwater is unsustainable are Punjab, Rajasthan, Haryana, Tamil Nadu, Gujarat and Uttar Pradesh. Ironically, these six states accounted for half the food-grain production in 2008-09.

It was established in 2006 to give focussed attention to Rainfed areas of the country. This advisory body formulated some common guidelines for the Watershed Development Project and is in consultation with all the States for its implementation