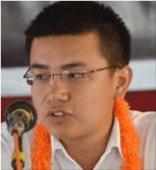 IAS officer Haulianlal Guite has recently published a philosophical novel for God titled “Confessions of a dying mind: the blind faith of atheism“. The book was unveiled by Union Minister Kiren Rijiju at august gathering of Civil Services Officers’ Institute in New Delhi. The book is touted as “the world’s first philosophical novel for God“. Haulianlal Guite is hailed as the first civil servant to write on Philosophy after John Stuart Mill’s work titled “On Liberty” published in 1858.
The book explores interesting arguments against atheism. It also explores the nature of science, religion, evidence and love in light of latest findings of modern science and the solid theories in philosophy. The unveiled book is the first part of the three volumes. The book is published by a UK based Bloomsbury Publishing.
Haulianlal Guite hails from Churachandpur district of Manipur. He cleared the 2010 Civil Services Examination with an All India Rank of 33.