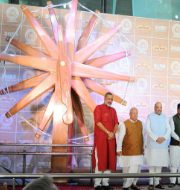 The world’s largest Charkha was unveiled at the Terminal 3 of the Indira Gandhi International Airport (IGI) in New Delhi.
It was unveiled by the Union Micro, Small and Medium Enterprises Minister Kalraj Mishra to remind India’s timeless heritage and the values of sustainability and harmony that it stands for.
Features: The Charkha made from high-quality Burma teak wood. It weighs four-tones and is 9 feet wide, 17 feet tall and 30 feet long.
Background