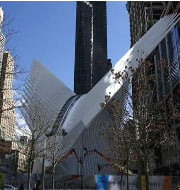 The world’s most expensive train station opened at the 9/11 site in New York, United States. It has been named World Trade Center Transportation Hub.
It is built next to the site of the Twin Towers in New York which were destroyed in the terror attacks in 2001.
Key facts