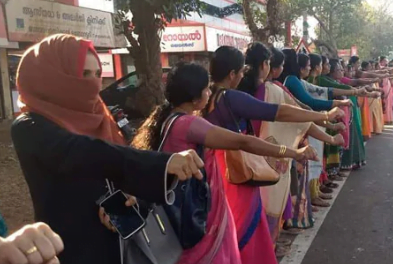 On 1st January, around 30 lakh women stood shoulder to shoulder to form Vanitha Mathil, “women’s wall” that ran across the length of Kerala. The wall stretched from Kasaragod in the north to Thiruvananthapuram in the south for about 620 Kms.

The event was organised by the Government of Kerala with the support of several political, religious and social groups. The participants at the Women’s Wall resolved to uphold the values of Kerala’s renaissance, ensure gender justice, and counter moves to turn the state into a lunatic asylum.
The event was also a counterdemonstration against the agitations preventing women of menstruating age from entering the Sabarimala shrine in violation of the Supreme Court’s ruling.
During the event, participants took a pledge to protect the values of social reformation movement, to support the idea of gender equality as conceived by the Constitution and to oppose any efforts to turn Kerala into “a lunatic asylum”.