Wilful Defaulters in Nationalised Banks up by 60% in 5 years: Govt 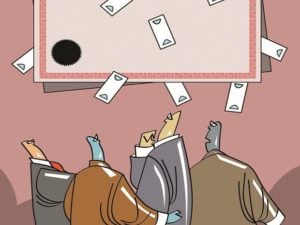 As per a written reply given by Union Finance Minister Smt. Nirmala Sitharaman in Lok Sabha, the number of wilful defaulters in nationalised banks has increased by more than 60% to 8,582 in five years to March 2019.

The Finance Minister provided the written reply in Lok Sabha to a question asked that whether the cases of willful defaulters of banks have increased during the past five years.

Wilful Defaulter is an entity or a person that has not paid the loan taken back to the bank despite having the ability to repay it. Wilful defaulters are acted against comprehensively.

During the last 5 financial years about ₹7,654 crore has been recovered from wilful defaulters’ accounts.

SARFAESI Act: In cases involving secured assets, action under provisions of SARFAESI Act (Securitisation and Reconstruction of Financial Assets and Enforcement of Securities Interest Act, 2002) has been initiated in 6,251 cases.

RBI Instructions: As per the instructions provided by Reserve Bank of India (RBI), wilful defaulters are not sanctioned any additional facilities by banks/financial institutions, their unit is debarred from floating new ventures for 5 year and even criminal proceedings are initiated wherever necessary. In accordance with this FIRs have been registered in 2,915 cases.

SEBI Regulations: Besides, vide Securities and Exchange Board of India (SEBI) regulations, wilful defaulters and companies who has with wilful defaulters as either promoters or directors have been debarred from accessing capital markets to raise funds.

FEO Act 2018: The government has enacted Fugitive Economic Offenders Act, 2018 for effective action against wilful defaulters who flee Indian jurisdiction. It provides for attachment and confiscation of property of fugitive offenders and to disentitle them from defending any civil claim.

PSBs: Government has also advised all Public Sector Banks (PSB) to decide on publishing photographs of all concerned wilful defaulters and to obtain certified copy of passport of promoters/directors and other authorised signatories of companies availing loans of over ₹50 crore. The heads of PSBs have also been empowered to request for issuance of look out circulars (LoC) against wilful defaulters.