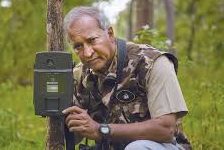 The award is instituted by Wildlife Conservation Society (WCS), New York. It is named after WCS’s Dr. George Schaller, considered to be one of the greatest wildlife scientists and conservationists globally. The Lifetime Award was created to honour WCS colleagues for outstanding contributions to saving wildlife and wild places.

He joined WCS in 1988 and was inspired to become a wildlife biologist by the work of Dr. Schaller. He is currently the Director of Centre for Wildlife Studies, Bengaluru, Karnataka.

His research is described as pioneering and groundbreaking with focus on ecology of tigers, predator-prey population ecology, sympatric predators and other large mammals, and mitigation of human-wildlife conflicts. He has also provided research expertise to projects across many countries including- Russia, Indonesia, Cambodia, Thailand, Malaysia, Lao PDR, Myanmar, Africa and Latin America.