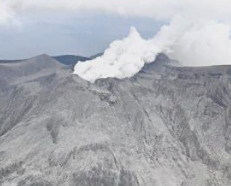 A volcano has erupted on Kuchinoerabu Island of Japan. The eruption occurred on Mount Shindake. Mount Shindake had experienced explosive eruption in 2015. Japan’s Meteorological Agency has alerted people for volcanic rocks and pyroclastic flows.

Kuchinoerabu Island belongs to Kagoshima Prefecture, Japan. The entire island lies within the borders of the Kirishima-Yaku National Park and the islanders are mainly dependent on fishing, agriculture and seasonal tourism.
The island is of volcanic origin and has an area of approximately 38 square kilometres. The Island has an active volcano.
Increased seismic activity in 2015 and an eruption resulted in an ash cloud. Eruptions in December 2018 and January 2019 led to pyroclastic flows.

Kagoshima Prefecture (Prefecture is the first level of jurisdiction and administrative division in Japan) located on the island of Kyushu in Japan. This prefecture includes a chain of islands stretching further to the southwest of Kyushu for a few hundred kilometres.