US Civil Rights Activist John Lewis Dies at 80: End of An Era 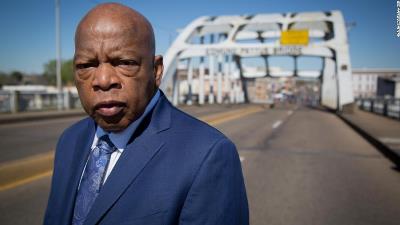 John Lewis, the civil rights warrior, passed away at the age of 80, on 17th July 2020. He was known for his fight against racial injustice to the Blacks in the USA so that he could start a better USA where no racial discrimination will be there.

Lewis, an African-American leader, also walked with Martin Luther King Jr. and was nearly beaten to death by the police. He was also arrested multiple times later also as a sitting congressman when he protested against genocide and immigration rules of the country.

Lewis was the son of a sharecropper and his childhood has an indelible impression on his views later on. The Congress was also impressed with his image of an indomitable statesman in the House. He was diagnosed with Stage IV pancreatic cancer in 2019 and was under continuous treatment for the same.

John Lewis had also protested against the sitting US President, Donald Trump, multiple times since he was completely against his inauguration at the White House and also the Russian interference in the US Elections in 2016, questioning the fairness of the same.

John Lewis was born in Alabama in 1940 and he was the third of 10 children of his parents. Since his childhood itself, he learned about the segregation against the Blanks in the USA and he wanted to protest against such discrimination.

Lewis was only 21 years old when he became one of the founding members of the Freedom Riders, who fought segregation of the US transportation system in the 1960s and from there he became one of the most powerful leaders for justice and equality in the USA. He was also the youngest leader of the 1963 March on Washington which became famous for the famous “I have a dream” speech of the Martin Luther King Jr.

In 1965, he was nearly killed by the police while protesting for the voting rights of the Black People in the USA. He suffered a fractured skull on that day which later came to be known as ‘Bloody Sunday.’ In 2015, exactly after 50 years, he walked hand-in-hand with the then US President, Barack Obama, the first Black President of the US, on the same bridge as in the 1965 march.

He was presented with the Medal of Freedom, the highest civilian honour of the country, in 2011.