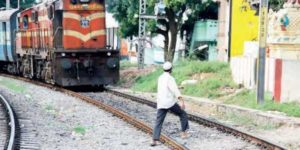 On January 31, 2019, Indian Railways declared that last unmanned level crossing has been sealed and at present there is not a single Unmanned Level Crossing in the broad-gauge network in India.

Method: Majority of such UMLCs were eliminated by merger, closure, introducing subway and manning. Although nearly 93% of total network of over 120,000 km is under broad gauge but India’s railway network still has close to 1,500 UMLCs on meter gauge and narrow gauge.

Since ULCs were not designated crossings and were not protected so there have been a often suffer injury or loss of life or even number of deaths in past due to a collision between trains and vehicles. Now as ULCs have been entirely removed from railway network so numbers of train accidents are expected to decrease significantly.

Indian Railways also seeks to revamp all railway stations as many as 87 out of 115 aspirational districts have been connected with the rail network.